As we continue to commission and provision the boat, we are learning tons.  Unfortunately, some of the lessons are proving to be more expensive than we anticipated.  But we are learning, nevertheless.

The last couple of days, we have learned more than we ever knew about life rafts.  Hopefully sharing some of that experience here might help save someone else some money, time, or maybe even something more important (your life?).

When we bought our boat, we definitely knew we would want to have a life raft on board.  It is remarkable, but a lot of people seem to cruise without this piece of safety equipment.  It is pretty easy to rationalize not having one, especially on a catamaran.  People argue that cats don't sink (apparently they will fill with water, and even turn over, but because of the two hull design and small keels, they don't go down).  Also, if you are mainly cruising in close to shore, theoretically you can use your dinghy for a life raft, although it doesn't really provide any sun protection, or any of the extra gear found in your standard life raft.  Anyway, early on in the start of our boat buying process, Sara and I agreed that everything about a boat purchase was a compromise one way or another, but we wouldn't compromise on safety, given that we had our three kids aboard.  Therefore, a life raft.


So, one of the things we liked about this boat when we were shopping was that it came with a life raft. We knew it was out of date, and would need to be serviced (the manufacturer's generally recommend servicing every three years to ensure the thing will work when needed).  But we figured that would be easy to do.

As we are working through our list of commissioning projects, it came time to ensure that the life raft was good to go.  So, I started to look at the cost of getting one serviced.  Surprise number 1: it appears to cost pretty close to about 1/2 the cost of a brand new raft to get an old one serviced, depending on how long it has been since it has last been done.  For us, it would be significantly more than 1/2, since if we were to buy new, we could buy smaller.

The next surprise came when we actually looked at our raft.  It looked like it was built and sold in 2004, without any indication that it had ever been serviced.  So it was at least 6 years past it's service due date.  Which meant it would cost a lot to get it serviced properly.

OK, still, it was quite a bit less to get it serviced than to buy a new one.  So, I did a quick Google search, and sent an e-mail out to companies in both Ft. Lauderdale and Miami about our raft.  About that time came surprise number 3.  Sara and I tried to move the raft out of the back locker, to see what it would be like to get it out to the car.  Ugh!  We could just barely move it, with both of us lifting hard. Primarily, this was due to the fact that the raft was a 10 person affair, meant for a boat bigger than ours.

Surprise number 4 came as we got our first response from a life raft servicing company (84 Boat Works, in Fort Lauderdale).  The first thing they suggested was that our raft was too big for our boat, which we had already figured out, given that it took up a huge amount of space, and we could barely move it.  However, they also pointed out that a bigger raft is actually more dangerous with a smaller group of people, given that the risk of hypothermia increases with fewer bodies warming a larger space.

The biggest surprise came when they told us their opinion of our raft.  According to Brian at 84 Boat Works, they neither carry or service Plastimo, due to the low quality of the inflatable material in the hulls.  His feeling is that they are poorly built compared to the rest of the rafts on the market, and he is not willing to take on the liability of selling them.

So, at that point, we were starting to lean pretty heavily towards getting a new raft.  Pretty expensive, but again, no compromises on safety, right?  Besides, we could re-sell our never-opened life raft, and defray at least some of the cost of the new one.  Combining that and the savings we would have from not getting the old one serviced, a new one wouldn't be that expensive.

Cue surprise number 5. As mentioned, 84 Boat Works had no interest in taking our old raft for trade, and wouldn't consider selling it for us.  We contacted a sailing consignment store in Ft. Lauderdale, and they confirmed there was not really a market for an out of date raft, since most other people would also just buy new and get a warranty.  The inflatable store in Miami contacted us, and they confirmed that it would be almost impossible to sell the old raft.  A quick search of Craigslist and E-bay revealed little to no market.

So, what to do?  The best offer we got was from Brian at 84 Boat Works, who offered to allow us to open the raft in his parking lot, and they would dispose of it after.  It hurt to think that this several thousand dollar piece of equipment, which had been sealed in a canister for it's entire life, had essentially no value, but that seemed to be the case.

Long story short, we took the best offer available.  In an effort to gain some value out of it, we turned it into an educational field trip for the kids, and took the opportunity to have them watch the safety video that came with the new raft, as well as show them how to deploy a raft, using the old one.  Hopefully that will be a once in a lifetime experience for them.  We also scavenged the old raft for any supplies we could use on the boat, or in our ditch bag.  Finally, we got the kids to try some raft rations and distilled water, again for the educational experience.  We also had them write down what they thought about the whole process.  Their thoughts are copied below.  So in the end, we got an expensive lesson in safety, which I hope we never need to use, but as they say, if you think education is expensive, try ignorance. 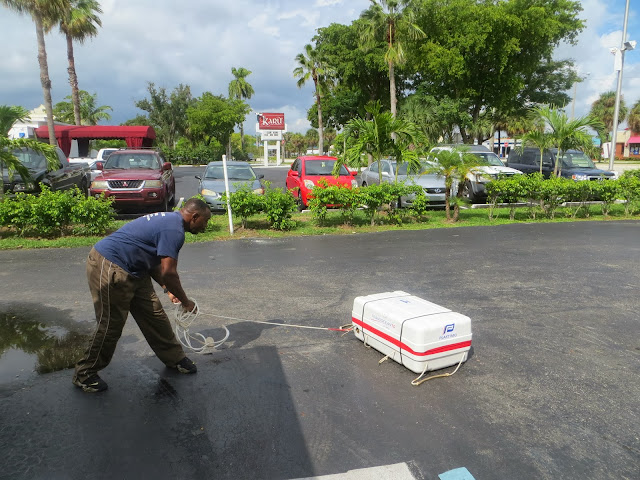 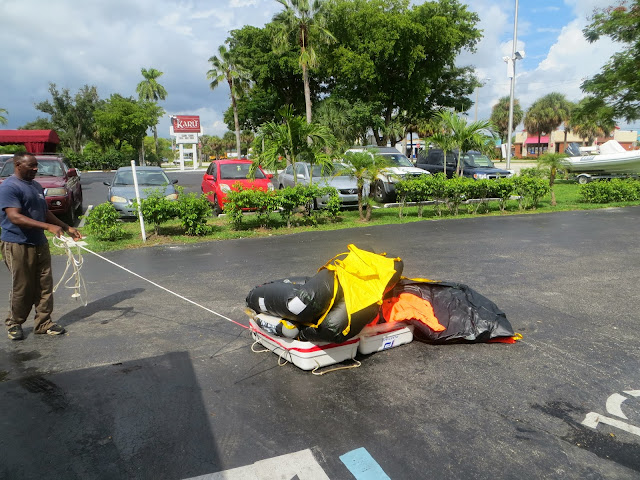 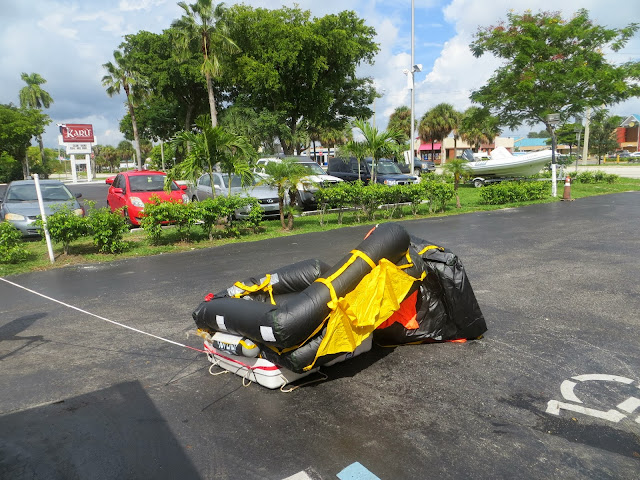 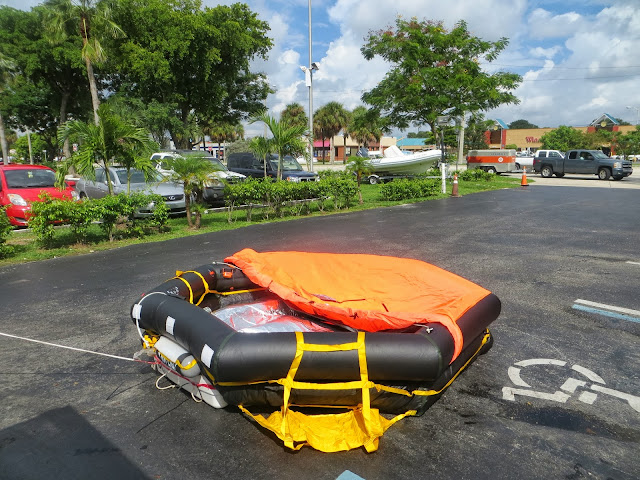 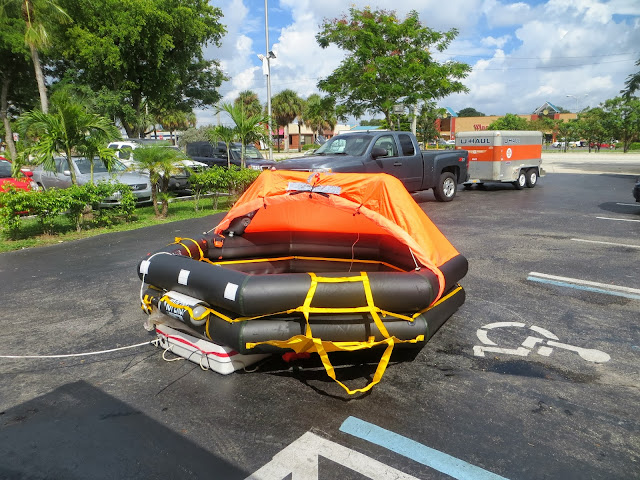 Today I learned about safety, life, cool stuff and weird food.  I learned that a life raft that’s for more people then you have is worse, then you might die of freezing plus I learned what was inside a life raft, cold CO2 cool huh.  want to hear something else cool when we were blowing it up the guy just pulled the rope and the box ripped open and the raft exploded open and started to inflate.  Later dad said we had to try out the rations they ok but I liked them

Today I learned all about what being in a life-raft would be like. I can tell you now I am not in favour of that lifestyle. At all. Ever. First what was fun to know was how you would go about getting off an endangered boat. You would pick it up (i.e. the life raft)  and chuck it in the water, then tie it’s zip cord to the boat. Then as it moved away the chord would pull and POP! In a matter of seconds thanks to compressed co2 there would be a life raft waiting for you to jump into.

The raft is sizeable but not overly large to prevent from occupants getting cold because of no body heat. It has a cover which is surprisingly not for precipitation but for sun-burn prevention. Either way life on the raft would be hard. You would need to eat these crummy little ration biscuits that have barely any taste but still taste like chalk for some reason.

To drink though is sterilized water that comes in packets of barely any water. These are for rationing purposes.

Today we had an educational safety field trip. We learned about the intricacies  of a life raft. We got to see one blow up which was really cool. Once the rope was pulled far enough from the raft, it popped open and got filled with compressed Co2 which also left stuff behind that looked like dry ice. Apparently a smaller raft is safer to preserve body heat between the people. There were rations aboard like a knife some biscuits, little bags of water and lots of rope. We took some of these things to provision our own raft. Luckily for us we got to go through the educational experience of eating the biscuits and drinking the water. The biscuits were pretty much the definition of flavourless which we got to wash down with water (sarcastic cheering, yaaaaay). Weirdly the water that had been encased in plastic since 2004 tasted like water. Good water.

As a parting thought I’d like you all to try something similar at home. Make some lasagna store it for 9 years. See how that tastes.
catch ya lata

Posted by smountain at 6:10 PM