Life is a bowl of Berries

From the first day we hit the Bahamas, we have had nothing but strong northwest winds that have been bringing cool air with them.  Despite that, we pushed on from Bimini to Bullock’s Harbor on Great Harbor Cay, and suffered the consequences with an unpleasant 15 hour night, bashing into the wind and waves.
We spent a few days in Bullock’s Harbor recovering, and enjoying flatter water, but the wind continued to blow.  After a couple of nights on the boat, we went into the town of Bullock’s Harbor to check out the marina, get a weather forecast, and pick up a few groceries.  The trip to town was a real eye opener for the kids; picture the smallest town on the Gulf Islands, and knock the amenities back from first world to third world, and you can imagine what it is like.  The people were friendly, though, and the kids at the school, all dressed in their uniforms, lined up at the fence to check out the tourists walking through town.  The Berries are one of the less visited island groups in the Bahamas, and it is definitely low season here right now, so it turns out we are a bit of an anomaly.  The marina had the air of something from Deliverance, with the wind howling through the empty wooden docks, and a few people hanging out in the shade on picnic tables nearby.  They let us use their wifi, though, which got us the info we needed about the weather. 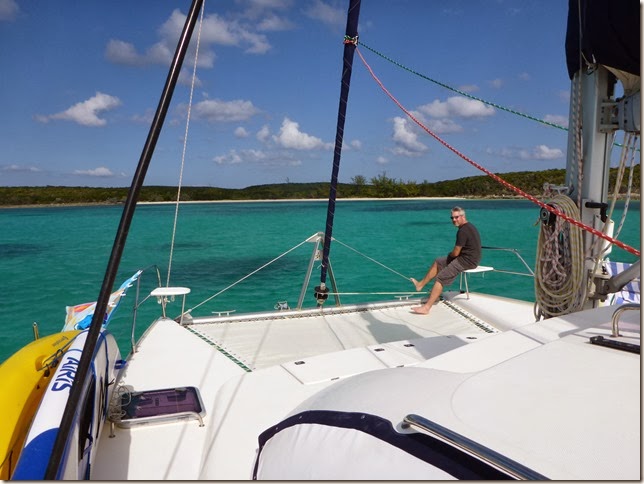 Once we had seen Bullock’s Harbor, we started to feel the urge to move on and see more of the Berries.  The weather report was essentially unchanged, with strong northwesterlies being forecast, but we rationalized that if we could bash our way around the north end of Great Harbor Cay, the wind would be on our beam, and we could reach right down to Market Fish Cay, and duck behind and out of the wind and waves.
So, we set out early Tuesday a.m., and had a great sail up the west side of Great Harbor Cay, protected from the waves, but getting the full effect of 18 to 20 knots of wind.  With two reefs in the main and a few extra wraps of the jib around the forestay, we were coasting along at 7 to 8 knots.  It was the first real sailing we had done on Monashee, and she handled it great. 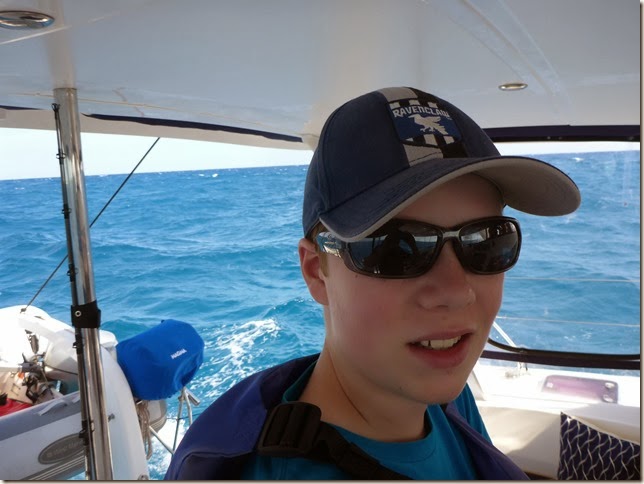 Before long, though, we were out from behind the protection of the island, and were turning straight into 3 meter swells.  We had to start the engines just to make any headway.  With those waves, we didn’t want to have to tack way north, then back down again under sail, prolonging our time in the open.  We worked our way past the two cruise ships that were there to enjoy the “private islands” that the cruise ship companies own north of Great Harbor Cay. 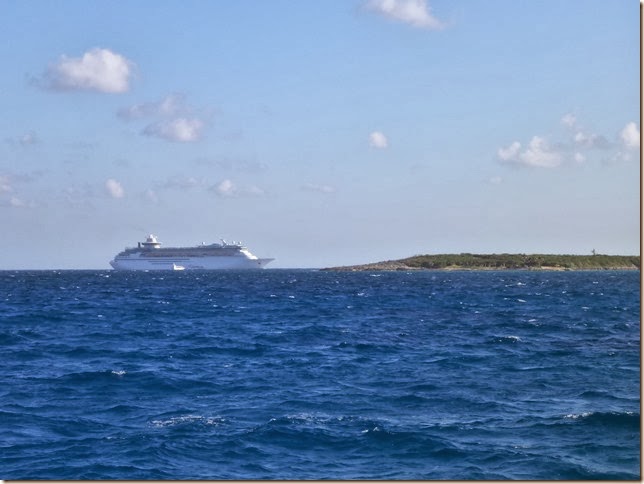 After about an hour, we rounded the north end of the island, and turned southwest, putting the wind onto our port beam.  We took off again under sail, but still had huge rollers bouncing us around.  All the kids hung out on the coach house roof, watching the waves to keep from getting sick, and hanging on tight as the boat rolled side to side.  It was a pretty wild ride, with spray breaking over the foredeck every few minutes. 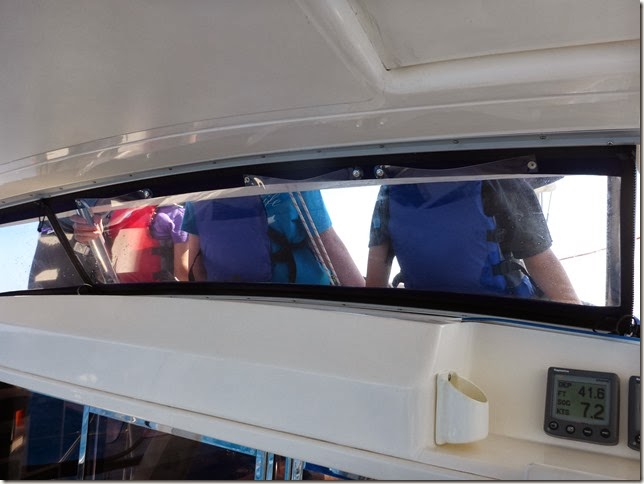 Eventually, we made it in behind Market Fish Cay, and immediately enjoyed the quieter water.  We motored through some shallows, at one point just brushing our starboard keel on the sandy bottom.  We passed another catamaran flying a Canadian flag – Windrush, out of Lunenburg Nova Scotia.  We worked our way down to the next beach beyond their boat, and dropped anchor in about 8 feet of water.  Despite the ongoing wind, the water here was the bright blue turquoise you see in the travel guide books.  We were happy to have found a spot to hide from the wind for a few more days.

Posted by smountain at 8:30 AM