Our second day driving through Montana showed us more of that beautiful state.  It was punctuated with episodes of severe thunderstorms, and at one point we had to pull off the road and wait for the rain to pass, since we couldn't see more than a few feet ahead.

We got to Yellowstone late in the afternoon, but we still had a fair drive through the park to get to our cabin at Yellowstone Lake Hotel.  We were amazed the whole fee for us to enter the park was only $25.00 for 7 days.  It has been a while since I was in a Canadian National Park, but it seems to me it cost a lot more than that.

It wasn't long after we entered the park that we started to see the telltale lines of cars stopped at the side of the road, which signified wildlife to be seen.  We saw lots of elk, deer, and buffalo.  It was cool to see the animals, but compared to what wanders across our lawn at home, it wasn't all that dramatic. 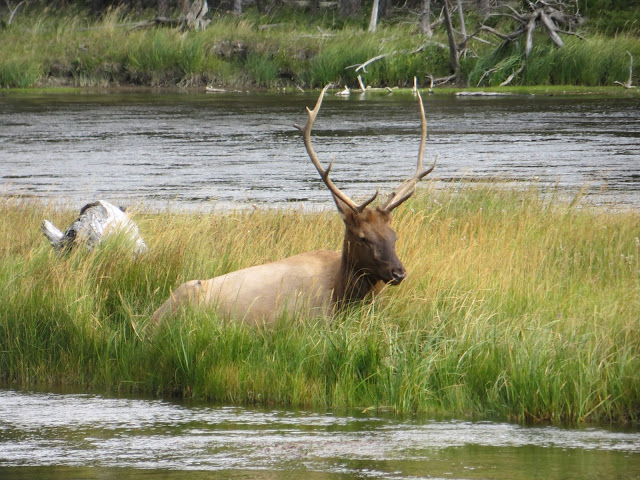 We stopped for a quick dinner at the Canyon Area cafeteria.  We were pretty impressed by the National Parks infrastructure.  It is quite a different approach from Banff and Jasper.  There are gift shops, cafeterias, diners and gas stations at several spots throughout the park, but all are managed by the company that runs the park.  There is none of the private enterprise that you see in the Canadian parks, with their independent towns.  There are also great interpretive centers at all the areas, that are well staffed, and have really informative displays.


After dinner, we headed on through the park towards Yellowstone Lake.  On the way, we saw lots more buffalo.  The thing that excited us most, though, was seeing the geothermal activity.  Bubbling pools of mud, and steaming, rotten-egg smelling ponds stopped us several times along the way.  This was like nothing we had ever seen before, and we were all impressed more than we had expected.  It was pretty clear that we were right on top of a volcano.  Exciting stuff!

We finally made it to our cabin, which was really just one of many little huts next to the old fashioned, majestic Yellowstone Lake hotel.  Exhausted, we all collapsed into bed.

The next day I got up early to see if I could spy some wildlife before to many park visitors were awake.  I was rewarded with a beautiful sunrise as the mist on the lake dissipated with the warming day. 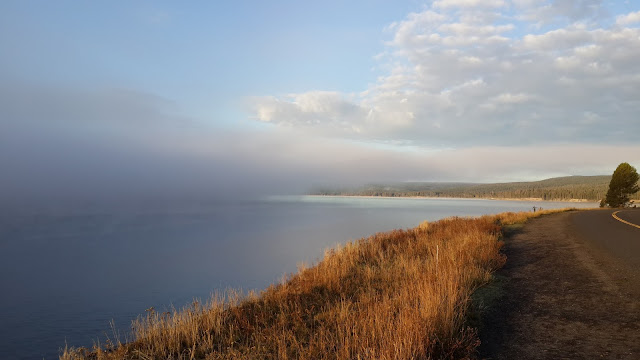 I didn't have to go too far to see some wildlife.  A buffalo herd had surrounded the post office just across the parking lot from us.  Several people waiting to mail letters decided to come back another time. 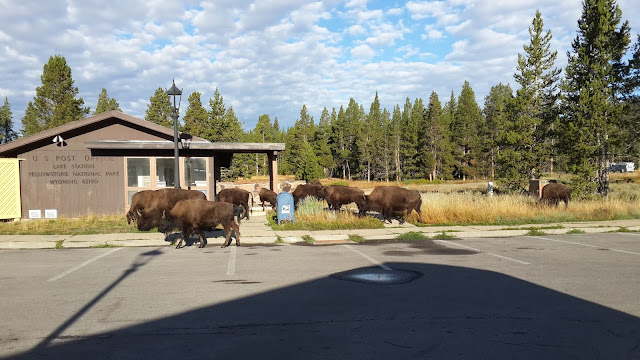 The rest of the day was spent geyser hunting.  We stopped at lots of various features along the lower ring road (there is a big "figure eight, made up of two ring roads, that tour you through the park). 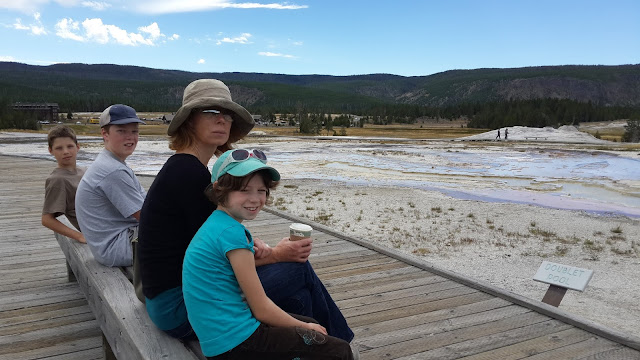 Of course, no visit to Yellowstone would be complete without a trip to Old Faithful.  It was the most developed area we saw in the park.  This was where we encountered the tour buses, and tons of other tourists.  Although from what we could tell, things were far below capacity.  It looked like all the parking lots, cafeterias, and other facilities were set up for crowds at least 2-3 times what we saw. 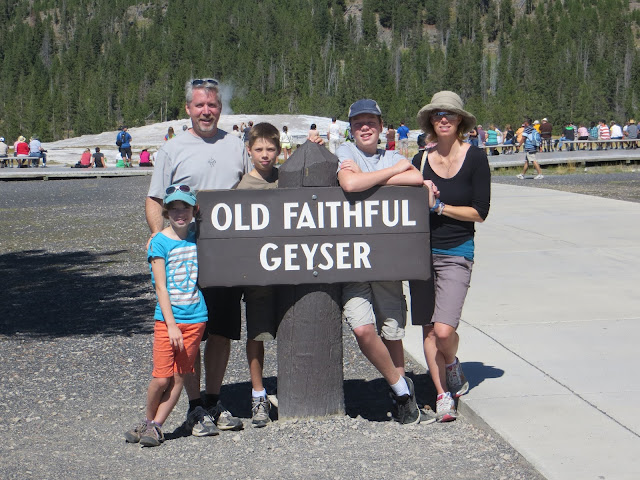 The  next morning, we had a relaxed breakfast at the Yellowstone Lake Lodge, which was a short walk along the lake from our cabin.

The architecture of the lodges and the hotels was beautiful.  It really spoke of the history of the park.  You could see that the buildings were conceived and built in an earlier time, when grand structures in a natural setting were the order of the day.  In fact, the whole history of the park was really fascinating.  It was the first national park in the world, given protected status by Ulysses S. Grant in 1872.  I am sure you can read all about it online, if you are interested.  The development of the park from then until now has lots of great stories.

Anyway, after breakfast we headed on out, dodging buffalo all the way.  We are now in Sheridan, Wyoming, hoping to make it to Mount Rushmore tomorrow.  We are definitely playing the part of the dutiful tourists, but it has been fun so far!

Posted by smountain at 9:30 AM