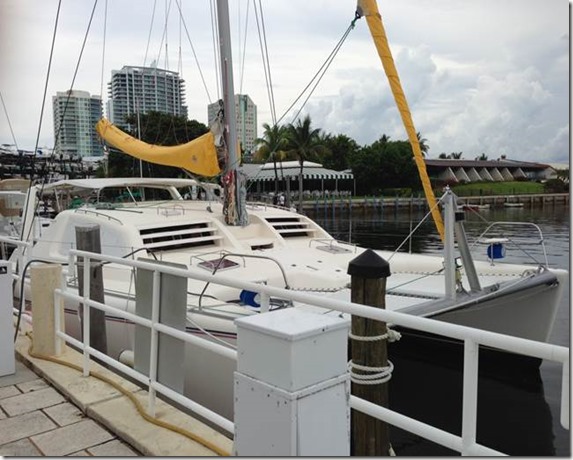 We’re back in Florida, hopefully for the last time until we come down to get on a boat we actually own. Beat up by the time change yet again, we are heading home today.

It has been an eventful few days. We had a couple of boats at the top of the possibility list on the way down. In fact we were really split between two boats – a Leopard 47 that was in captained charter, and a Leopard 40 that was privately owned and had just returned from an Eastern Caribbean sabbatical cruise. On paper, the pros and cons seemed to balance each other out almost exactly. We were really hoping that by getting on the boats and seeing them, we would get a better feel for them and know which one was right for us. 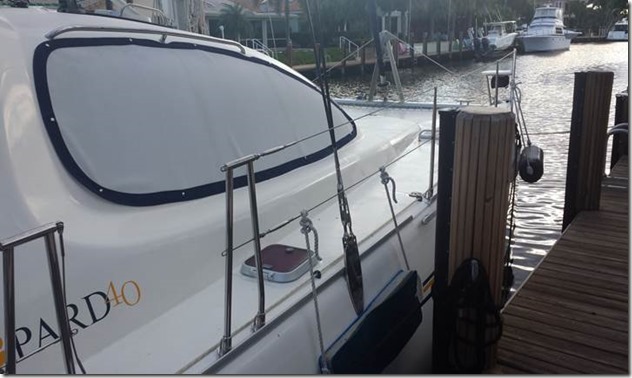 The good news is, things worked out exactly that way. Within minutes of stepping on each boat, we knew. One was a clear no go, requiring a ton of work to get it up to the standard we wanted. The other was almost perfect – clean, equipped with nearly everything we wanted, extremely well taken care of, and a perfect size for a family of five.

In fact, the boat was so good that we cancelled trips to view a couple of other “also-rans” that we had planned to see as backups. Instead, we spent a second day going back to the boat of choice and getting walked through all the systems on board. We also booked a survey to be done tomorrow. Unfortunately, we won’t be here for the survey, but we trust the surveyor we used last time to do a thorough job, even in our absence.

So, now we wait for the survey. Assuming there are no huge concerns raised, we will go ahead and buy ourselves a boat.

Oh, you are probably wondering which one we have decided on? Well… in the interest of preserving some suspense, and also not jinxing the deal you’ll just have to wait until all the i’s are dotted and the t’s are crossed. We have gotten this far a couple of times before, and things haven’t gone through, so I don’t want to get too optimistic just yet. More to come, hopefully soon.

For now, we have a 15 hour trip back home to conquer today. Followed by switching our internal clocks back to Pacific Time (I cringe to think it is 4 a.m. at home as I write this – the reality of that will kick in tonight).
Posted by smountain at 7:00 AM