Taking a break from our break

When the weekend comes, most people with a boat head down to the water, maybe spend a little time working on the boat, then head out and enjoy.  This is evidenced by the number of boats we saw out this weekend.  The ICW (intracoastal waterway), which is just up the canal from us, was whipped into a froth with power boats zipping by, clearly flaunting the 25 mph posted speed limit.  The "lakes" around here, which are really mostly just wide spots in the ICW, are so crowded with boats in some places that you could almost walk across touching nothing but fibreglass.

Not for us, though.  Instead of taking a break on our boat, we are planning to take a break from our boat.

We had a big day of project finishing on Saturday.  Rafael came by again, and we spent all day replacing the windlass motor, wiring in the new hour meters, cleaning the carb on the outboard, and putting in the new blower on the starboard engine.

While we were doing that, Zack came by and put in the new dampener plate on the starboard engine, and put the whole engine back together.  So now, theoretically anyway, we could actually move the boat if we wanted to.

I know the list of jobs may not sound like a full day's work, but everything we do on the boat leads to finding several more jobs that need to be done.  For instance, to replace the windlass motor, it turned out we had to remove the entire windlass to get at the through bolts (that took a while to figure out). Then, Rafael noticed that there was a bit of soft deck around the bolts.  Also, there were old bolt holes from a previous windlass that had never been filled.  So, that led to reinforcing the deck with epoxy in order to make sure it was super-strong.  The last thing we need is to have our windlass pull free of our deck when our anchor chain puts some pressure on it.


Anyway, long story short, the whole thing took quite a while to repair properly.  The impressive thing about both Zack and Rafael is that no matter how hot it got, or how long the job stretched out, both of them remained calm, patient, and pleasant to work with.  And no shortcuts were taken.  So now I know our windlass is solidly fixed in place, the deck is in one piece, and we have a brand new windlass motor that should happily pull up our anchor for many years to come (fingers crossed).

So, yesterday, as Alexander noted in his post, we took a break, and headed to the beach.  This week, we are going to spend a couple of days at Disney World, since we couldn't really hang out in South Florida for a month without doing that.  And the kids really deserve it - they have been troupers through two weeks worth of trips to Home Depot and Ikea, with little to break the monotony besides the occasional trip to the beach or mall. 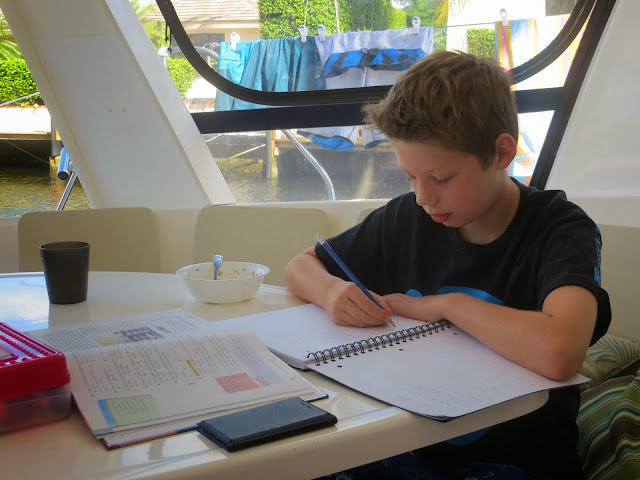 OK, reading that back, I realize it doesn't really sound so bad, but trust me, there has been a lot more shopping and boat work time than beach time.

Posted by smountain at 9:26 AM