On the morn of the day of departure from Santiago De Cuba we did math. Mom said that the whole boat had to be washed. It was covered in spots because of the fumes of a nearby sulfur plant.

It didn’t look very good so we had to get a special soap from the marina. It was a pink acidic toilet bowl cleaner but it was all they had. Mom wouldn’t let us help because the stuff stings. So instead we sat doing math while she washed the boat. Poor mom.

Dad wasn’t doing very well. He was pretty sick, probably from something he ate in Cuba.  He called it "Batista's Revenge", which is some sort of political statement.  Mom said we should stay until he felt a bit better but Dad had one thing to say to that! “Let's just get out of Cuba!” So we set out  in the afternoon. We cruised out of Cuba and out to sea. It was going to take the rest of the day and the night to get there. Luckily it was very calm. The wind was coming straight onto our bow so we ran the motors.  They both ran beautifully the whole way to Jamaica, so it looks like Carlos Caballero fixed them right! 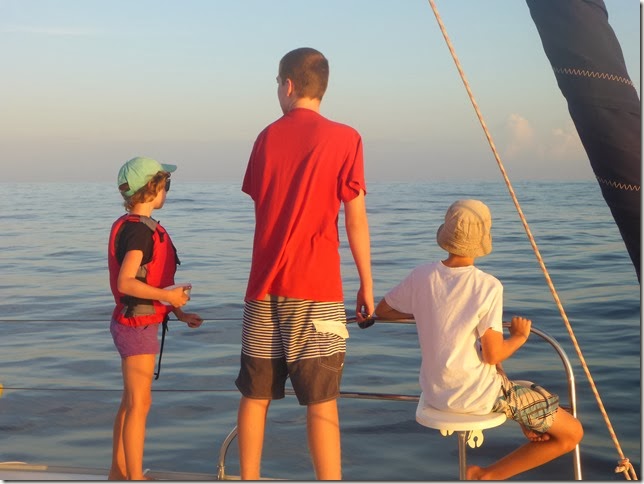 We cruised on.  Just before the sun set, we saw a splash off our port side, and a minute later, we were being chased by a pack of dolphins. They were so fast that keeping up with us was no problem. They moved so smoothly through the water, they didn't seem real.  There were more than ten of them! They were leaping high into the air out of the surf and made an already fun passage awesome.

We've had dolphins swimming along with our boat a few times now, but it never gets old.  If you want to watch that in full screen, scroll your mouse over the word "vimeo" in the bottom right corner, and click it to watch it directly on vimeo.

Later into the night Christopher and I had the first watch. It was nice until I glimpsed a brief flash on the horizon. It was so faint that I thought it might be nothing. The flashes kept getting brighter if not more frequent and Christopher and I realized there was a thunderstorm in the distance. We got Mom and she said it would be fine. The east wind would blow it past us. Christopher and I were not so sure. Our mast was made of metal and was the tallest thing for miles. A thunderstorm would eat us for breakfast. So we did the rest of our watch pretty sure the boat was going to be blasted apart by lightning  Don’t worry, it wasn’t.
Our sail into Jamaica was beautiful beyond words so I’m probably going to fill this part with pictures.

Posted by smountain at 6:00 AM